Moving Toward a Shared Win for All Women

Obie is a Director of HR Research & Advisory Services at McLean & Company, with a focus on diversity, equity, and inclusion (DEI).

As we celebrate this 111th International Women’s Day (IWD), the progress in women’s rights is undeniable. Our accomplishments include increased parity in legislative rights and a significant representation of women across various professions. We have top athletes, professionals, and artists, as well as more women obtaining advanced degrees.

As we applaud these successes, it is easy to forget that people who identify as women are not a monolith. There are other identities, such as race, immigrant status, and sexual orientation, that intersect with the identity of being a woman. A report that looked at gender and race representation across corporate roles showed that women represented 24% of C-suite roles, and racialized women accounted for only 4%. The progression from entry-level roles to C-suite roles showed more than 75% drop-off for racialized women, while their white counterparts had a drop-off slightly over 30% (McKinsey & Company, 2021). 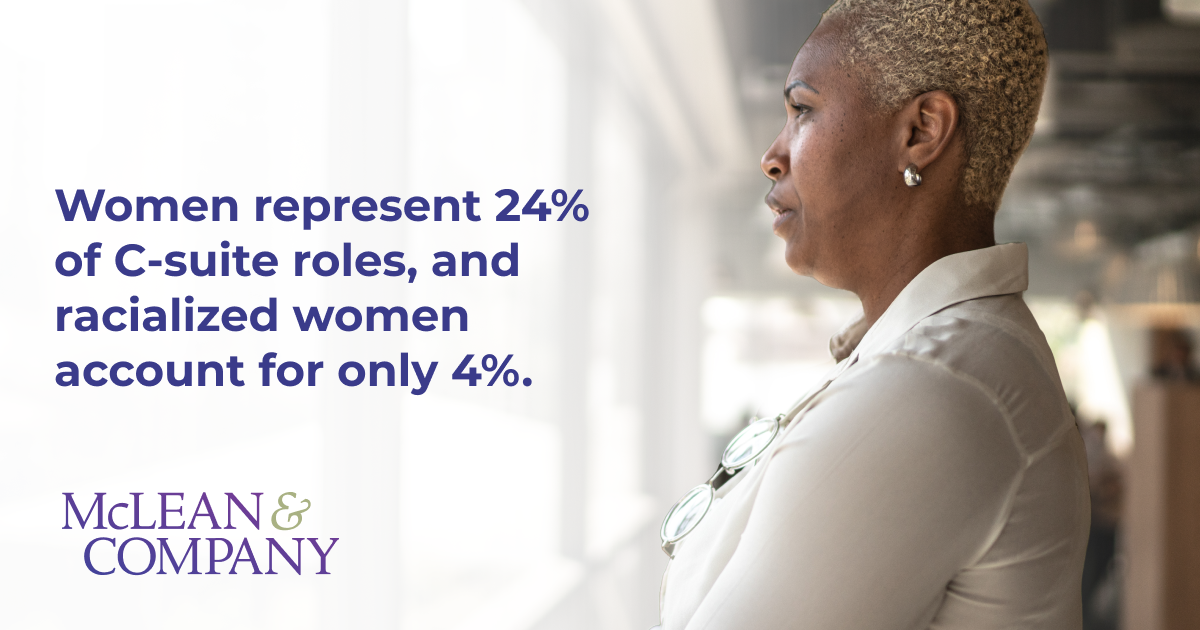 This phenomenon has been referred to as the “broken rung,” a term used to describe the impediment women face on their way to leadership roles. It appears at the first step to becoming a manager, as more men are promoted into first-time managerial roles than women. This barrier perpetuates lower representation of women in senior leadership roles, and the lack of representation is notably higher for racialized women.

A broken rung is not the only reason for poor representation of racialized women in coveted C-suite roles or managerial roles. Various literature and discussions have pointed to a lack of role models: One study by nFormation and the Billie Jean King Leadership Initiative revealed that 58% of racialized women agree that a lack of senior leaders who look like them has impacted their career, compared to 35% of white women who agree with that sentiment. For the few racialized women who have broken through the concrete ceiling, being the only one can significantly impact the mental and emotional bandwidth required to mentor or sponsor other racialized women.

A 2021 survey confirmed that women leaders are more likely than their male colleagues to invest time and effort on diversity, equity, and inclusion (DEI) work and participate in active allyship activities such as mentoring. However, even though more than three-quarters of white employees believe they are active allies to racialized women, less than half participate in basic allyship actions (McKinsey & Company, 2021). In another paper, over 74% of white women shared they were committed to referring racialized women for job opportunities and publicly giving them credit for their work and contributions, but less than 10% were actively sponsoring racialized women, revealing an allyship gap (nFormation and Billie Jean King Leadership Initiative).

Racialized women who overcome obstacles against upward mobility in corporate spaces encounter a myriad of issues that cause them to self-select out due to absence of infrastructure and management support. This deficiency in support for first-time women leaders impacts all, but the greatest casualties are racialized women, who are 18% less likely to feel supported by their supervisors (nFormation and Billie Jean King Leadership Initiative).

The promotion of women into leadership roles without proper support, especially in times of crisis, is referred to as the “glass cliff,” a phrase created by psychologists Michelle Ryan and S. Alexander Haslam (British Journal of Management, 2005). Without the necessary support systems, these newly minted leaders at whatever rung in the organization are doomed to fail.

For many racialized women, these statistics and examples recall Sojourner Truth’s entreaty “Ain’t I a Woman?”

Closing the gap: Be intentional and invest in and support all women

The first step in ensuring that a gain for women is a gain for all women is to confront our bias and heuristics about one another and reject stereotypes about people who are different from us. This is particularly important if we are to reduce the effect of the broken rung. Not recognizing our own bias, including the “like-me bias,” and offering greater leniency to specific groups contribute to who gets promoted or given stretch assignments that lead to a promotion. Stereotypes such as the “model minority” and the “angry Black woman” are damaging and may compound the effect of the broken rung.

Intentionally disrupting bias and stereotypes through accountability and taking a chance on someone who is visibly and intellectually different from you can help push more racialized women over the broken rung.

“The key factor was connecting with individuals who believed in her, invested in her, and were willing to use their access to open doors for her.”

Another step is to be an active ally, including sponsoring and mentoring racialized women. Rosalind Chow, associate professor at Carnegie Mellon University, defines sponsorship as the relationship between a sponsor and a protégé where the sponsor provides “externally facing support, such as advocacy, visibility, promotion, and connections” (Harvard Business Review, 2021). In contrast, mentorship focuses on the one-on-one help a mentor provides in the form of guidance, advice, and feedback.

In the famous “Best Practices or Best Guesses?” literature on DEI initiatives, researchers Frank Dobbin et al. (American Sociological Review, 2006) discovered that mentoring initiatives had a better outcome for racialized women. This is supported by stories of leaders like Tanya Sinclair, the former Chief People Officer of Artscape. Ms. Sinclair, who was sponsored by two women who did not look like her, shared that the key factor was connecting with individuals who believed in her, invested in her, and were willing to use their access to open doors for her. With few Black women in positions of leadership, it was important to remain open-minded about who could mentor and sponsor her. Although research shows better outcomes for mentoring initiatives, it is not a panacea. Often racialized women may have all the skills they need to gain from mentoring but lack sponsors to advocate and champion their work.

Addressing the absence of management and infrastructural support is critical not only for first-time leaders, but for all women at every level. This means women should not be promoted to positions of leadership only to be undermined or as a last resort in times of emergency with no collaboration and cooperation from management. Environments for success must be intentionally created to include access to coaching (e.g. executive or leadership coaches), access to relevant people and resources, and trust in the leader’s ability and competence.

To ensure our gains as a collective are equitable, we must communicate unequivocally through our words and actions that it is okay to take a chance on women, especially racialized women.

To learn more about how McLean & Company can partner with you to create a meaningful and executable DEI strategy for your organization, please visit our DEI Resource Center or contact Jon Campbell at jcampbell@mcleanco.com.