Our own research at McLean & Company identifies that engagement is an outcome of a great employee experience, which is a trending topic, and engagement is an element of how we measure that experience. No, it’s not new or trendy, but it is fundamental. The CEO of Campbell’s Soup, Doug Conant, reminds us that “to win in the marketplace you must first win in the workplace.” Well-known motivational speaker Simon Sinek observes that when people are financially invested, they want a return; when they are emotionally invested, they want to contribute. That can only be good for organizations. 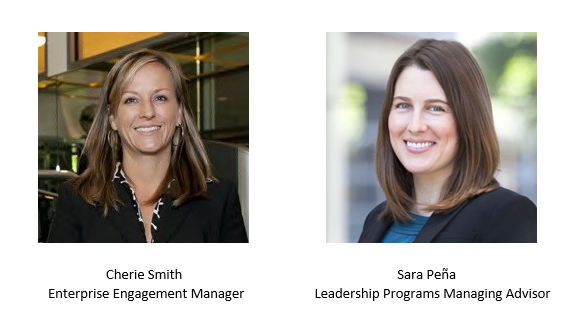 To explore this further, I sat down recently with Cherie Smith (Enterprise Engagement Manager) and Sara Peña (Leadership Programs Managing Advisor), of California Public Employees' Retirement System (CalPERS), to learn more about what really happens when a ~3,000 person organization runs its first engagement survey. With Cherie and Sara’s willingness to share their experience, we have the opportunity learn from it. Here’s what I discovered:

Did your employee engagement program look the same in practice as it did when it was being planned?

No, it was far more fluid. We didn’t really know what kinds of results to expect and how they would be received, so it was hard to plan next steps at the outset. Even so, it went very smoothly, because of the support received by McLean & Company, which set a clear process in place for all aspects of the survey, from beginning to end. With a best-practice structure in place, we were able to put together a loose plan, then make adjustments as needed to reflect evolving needs. We were comfortable with this approach.

Previously, an organizational health survey was done every three years. The action planning looked very different, and the word “engagement” was never used. With the engagement survey, the results are being lived out in real time. This new concept has been challenging, but the organization has embraced it with considerable energy and effort.

Some of the planning challenges came about with us (Cherie and Sara) doing the planning without making the survey an “HR thing”; ultimately, the executive team gets the final say, and they changed the plans at times. Senior stakeholders wanted to carefully time the flow of information out into the organization, and each group wanted enough time with their results before cascading it down – we couldn’t plan for that.

Also, there were plan changes around communications. Originally, the communications plan, created with the internal communications team, was mostly written. However, the organization has wanted more face-to-face interactions, speaking engagements rather than written messaging, which has resulted in update meetings in person. CalPERS wanted to hear “live and in person” from the team leading the engagement project.

What role do managers play in engagement at CalPERS? How was this built into the approach, and what have the results been?

HR facilitates engagement, but doesn’t own it. The communication team developed a tagline – “engagement starts from within” – to make it clear that this is a shared responsibility. The leadership team has broadly embraced this message, and recognized that their roles are critical, insofar as every interaction they have either builds or subtracts from engagement. They understood that it is their role to have ongoing discussions with their teams – not one discussion, but continuing conversations. This is being carried out to different degrees across the organization, which some branches showing more enthusiasm and some being slower to adopt.

McLean’s webinars on the manager’s role in engagement, held early on in the process, also helped to kick-start the transfer of responsibility from the engagement team to the managers. This series of webinars was offered to managers at all levels in the organization. The purpose of the webinars was to introduce managers to their role in owning engagement, provide them with the skills to draw insights from their survey data, and engage in action planning with their teams.

CalPERS is having a leadership forum next month where the leadership teams’ ownership of engagement is clearly highlighted. As whatever the CEO does on a daily basis will have a trickle-down effect, our CEO will also be speaking directly to engagement in that forum, with a particular focus on accountability and senior/leadership relationships.

How did you move beyond the survey as an event to an approach to every day work? How did it get embedded?

Communications have repeated over and over that this is not a one-time thing; it’s a way of being and it’s woven into day-to-day behaviors. This is going to take time, because not everyone will buy in; it may take a second year to net our desired buy-in. After next year’s survey, we will be able to see where the related actions taken by the branches have had an impact.

Getting results is part of what motivates the action! We will need to look at adding more results reports next year. Some managers didn’t get their own reports because they didn’t have enough direct reports to meet minimum confidentiality thresholds. It is harder to engage them in taking action personally without that data available, so we will look at ways to make it available in some way.

CalPERS achieved above average engagement scores. What do you think contributed to this?

CalPERS’ culture, with its focus on customers, development, inclusion, wellness, and recognition. We believe we are California’s best state agency to work for, so there’s a shared feeling of being part of the “best.” It’s a mission driven-organization, populated with smart, motivated, and driven people; we hire to that model.

How will you measure your success going forward?

Anecdotal evidence and feedback from employees. For example, we recently saw a division having a celebration that wouldn’t have taken place without engagement scores highlighting a need for it. Things “feel different” now. We are seeing more informal information emails from the executives to the organization, more mentoring.

We aren’t ready for broad formal metrics yet, but engagement has become part of the strategic plan and KPIs are part of the indicators. With ongoing surveys, and with the upcoming implementation of McLean’s Employee Experience Monitor, we will be able to see and report on changes.

If you could tell someone embarking on an engagement program one thing, what would it be?

OVER-COMMUNICATE! Do not underestimate the need for ongoing messaging.

Dedicate a resource to overseeing the program; it’s much more effective.

Thank you Cherie and Sara for sharing your employee engagement insights with us!

McLean & Company has a full suite of employee engagement offerings:

Learn more about McLean & Company’s engagement diagnostics here. We also have several related “do-it-yourself” blueprints to help you tackle employee engagement, such as:

Demystify Engagement Data, which walks you through how to move from numbers to insight to action, to drive both engagement and business results.

Empower Managers to Take Ownership of Employee Engagement, which focuses on transferring ownership of employee engagement from HR to team managers.